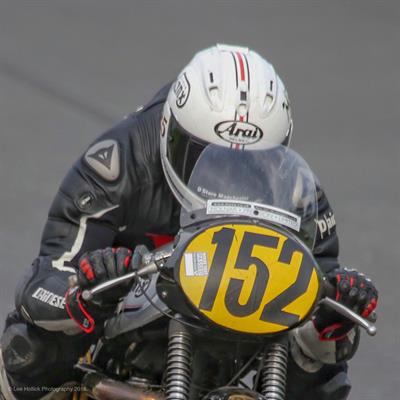 On 28th April 1946 a band of 38 enthusiasts assembled at the Lounge Cafe, Hog’s Back, Guildford, Surrey, with the object of forming a Motor Cycle Club for owners of machines manufactured prior to December 1930. CE ‘Titch’ Allen OBE who had been the promoter of this meeting took the chair and outlined his ideas. His main objective was to promote the use and preservation of ‘Vintage’ machines, from his vision the Vintage Motor Cycle Club was formed, and his passion in racing Vintage motorcycles given the energy it needed.

The earliest records from the 1950’s show the VMCC racing pre-1930 machines as invited events at other Motorcycle Clubs race meetings. With the growth in popularity of racing machines, the cut-off dates marched through the years, stumbling for a while at 1939, and then accelerating to the cut-off date for all eligible machines made before 1948. The VMCC organised its’ first race meeting at Cadwell Park in September 1967, working closely with the circuit owner Chas Wilkinson, utilising the Club circuit. Following this first successful meeting, there were two more meetings at Cadwell in 1968, building to three meetings in 1969, this time being split between Cadwell and the clubs first full meeting at Mallory park. After an argument with the main VMCC committee, the Racing Section was born in a meeting at Bitterswell in late 1969.

A small committee was formed and the Secretary, Dan Macdiarmid booked two race dates in April and September 1970, both at Cadwell Park, and then increasing through the years both in number, and selection of circuits. As the years have passed by, the Racing Section prospered, then in late 1979, at the frustration of the cut-off dates for machines, a splinter group was formed, birthing the Classic Club (CRMC) with its’ inaugural race meeting on August 1st 1980.

From those early days, the Racing Section developed with the times becoming Historic Racing, and finally British Historic Racing to shadow the use of predominantly British machinery. The cut-off dates of eligible machinery similarly moved with the times, differing from the main clubs ongoing 25 year rule, but never forgetting its’ early roots with classes for pre 1948 through to the “BEARS” machines of the 1980s. The broad spectrum for which BHR caters showcases the ultimate development of British machinery-pitting them against the best that Europe and America can offer! The huge variety of racing machinery that can be seen in action echo’s the VMCC’s mission to ensure that “Vintage” machines are best kept out of Museums and are ridden-hard!